Yeah, apparently I'm super into Parks & Rec right now (happened when you weren't looking). So much so that I'm legitimately hardcore shipping a couple under forty-five. A couple under thirty, what is going on, shit. I don't know how many of you are actually into Parks & Rec or care about Andy and April, but hey, here's some good music at least. If you want individual songs, just let me know. Post is unlocked so feel free to share if it tickles you.

Friends cut is complete. If you were cut, it means we never talk anymore, and I didn't hear from you on the original friends cut post. While I'd like certain LJ relationships to be more active, I didn't cut people that I talk to actively in other places. But if I feel we've grown apart in all aspects of internet life or we never really had much of an LJ relationship in the first place, then a cut was made. I'm not removing anyone from Twitter or Facebook, but if I did cut you here on LJ and you're uncomfortable with that, please feel absolutely free to sever Twitter/Facebook relationships as well. This has been the most significant friends cut I've ever made. Felt weird. But necessary.

Also, thanks so much to everyone for your lovely birthday wishes yesterday. You have no idea how much it made my day. I'll expound upon birthday shenanigans tomorrow, as they are not over yet. ♥ 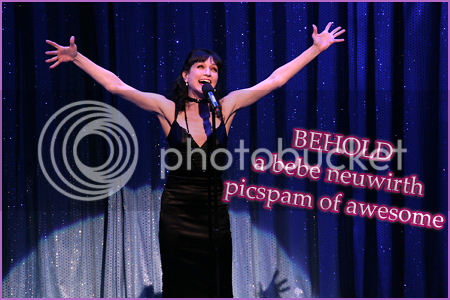 (This post is public should you know other fans who may enjoy it.)

That happened. Also I disabled comments accidentally. And didn't realize it until forty minutes later. Fail.

the_friday_spam in my journal, because they're usually of Annette and I figure you guys get enough Annette anyway. But this time it's Sally Field and this journal needs some of that awesomeness.

Yes, you are really looking at Jessica Lange, Goldie Hawn, Jane Fonda, Sally Field, and Barbra Streisand all in the same room at the same time.

[How I Met Your Mother Picspam!]

Oh, and because NOT ENOUGH PEOPLE ARE WATCHING THIS SHOW. And that is 104% not okay! It's got all the awesome, quirky humor of 30 Rock in the style of Friends. It is the perfect show.

Next time I'll make a more comprehensive spam with more screencaps. But this'll do for now. WATCH THIS SHOW. DO IT NOW. RUN DON'T WALK.

Holla. I'm always pretty awkward at doing these but here's the deal: it's hard to get into someone else's life. We all know that, I know that. Especially someone you only know online. And sometimes you just don't click. If I cut you, it's because I can't get into your life and you obviously can't get into mine. It doesn't mean I think you're a boring jerk. I'd rather have fewer close friends than lots of people who don't really care about me.

That said, if you think I've made a mistake, let me know and we'll talk about it!

Did a random friends cut. I'm sorry, I very much enjoy all of you, but there are some who just don't interact with me anymore and while I've enjoyed our friendship in the past, it's like a dead shark now, if we're taking the Annie Hall route. And chances are, if I was feeling this way, you were feeling the same, so it was probably for the best.

My icon is not mocking you, I promise. It just makes me happy, that's all.

Well, I got into Columbia. Looks like, if all goes as planned with housing and financial aid, I'll be spending the next year in the great city of Chicago. I really am making the rounds, aren't I? Maybe I can spend the following year in San Francisco. It's so strange now, to finally have a decision. I've waited so long that it hardly seems relevant anymore. In any event, my therapist will be thrilled. One less thing for me to babble on about. I should probably be more excited, huh?

My exanimation probably has something to do with the fact that I was awake until 10am this morning. Yeah, if ever a line was crossed with the whole sleeping thing, it was today. What was I doing? Well, I guess it's not me. Martha had her very first RP session with Lionel. Oh, god, I was such a an RP virgin, as

gingasaur can attest to. I was a nervous wreck, I don't even know why. It ended up being amazing though, because whoever plays Lionel is absolutely brilliant, she is Lionel, down to a tee, it's almost scary. Martha and Lionel, those crazy kids, had an "adult conversation" after hours at the Talon. Appropriate? Not really, because my Martha is still in season four and thus is very married to Jonathan. But they didn't do anything, not much anyway. He mostly talked about why they should and she talked about why they shouldn't. But it lasted a good five hours, in real time anyway. I think I like this RP thing...? Eeeeesh, who am I?

Several weeks ago, I promised a few people I would do a Superman III/Lana Lang picspam, to show all the ways in which original Lana pwns Smallville's Lana. In other words, Annette O'Toole vs. Kristin Kreuk. For some reason, I haven't gotten around to it until now, so here we go. ( Collapse )

Also, does anyone want to go to Chicago for a couple days in August? I have to go to orientation by myself, and being that I've only been to the city once before, I'd prefer to have a companion of some sort. It'll be fun. A rad city, fun shopping, Lake Michigan, and hopefully a chance to see Michael McKean on stage. Anyone in?

Eh, it was worth a shot.
Collapse